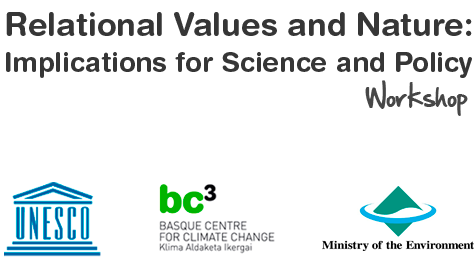 Concept Note of the Workshop

Relational Values and Nature:
Implications for Science and Policy

The conservation of biodiversity and ecosystem services has long been justified based on the instrumental and intrinsic values of nature. The concept of ecosystem services has been mostly associated with an anthropocentric notion of utilitarian and preference based-instrumental values as they are generally linked to mostly tangible benefits to society (Pascual et al., 2010;[1] Chan et al., 2012;[2] Wegner and Pascual, 2012[3]). By contrast, other long-standing reasons for conservation are also justified by the more bio-centric notion of nature’s worth in its own right. These contrasting views have spurred an acrimonious debate over which approach is better and often seen as substitute rather than complementary views (Justus et al., 2009[4]; Adams, 2014[5]). However, a primary focus on these two notions of values still fails to resonate with the ways in which many people view their personal and collective well-being and their ideas about “what is right”, including as it regards nature (Chan et al 2016).[6]

An emerging argument holds that while both categories are and will likely continue to form the basis of the motivation for conservation for many individuals and organizations, including governmental organizations and NGOs, each captures only part of what matters, but there is an important omission. This omission corresponds to the relational notion of values associated with nature (Chan et al, 2016). It is being argued that relational values better captures how many people conceive of reasons for environmental protection, their own well-being, and links between the two.  ‘Relational values’ include all kinds of mainstream conservation principles, preferences and virtues (e.g., the newly widespread view in North America that trophy hunting is wrong). But what should this new way of thinking about values and the environment imply for research, protection and policy?

This workshop will bring together leading thinkers regarding nature-human relationships and values to consider together how international and national efforts might be amended—if at all—to realize the promise inherent in relational values including nature. In so doing it will provide an important input for IPBES and the broader community of scientists, conservation practitioners and decision makers, via a robust conceptual understanding and practical guide on relational values for conservation.

The IPBES conceptual framework (Diaz et al 2015)[7] and the recent preliminary guide regarding diverse conceptualization of multiple values of nature and its benefits, including biodiversity and ecosystem functions and services (IPBES, 2016)[8] acknowledges the existence of relational values. They also explicitly acknowledge the different paradigms or worldviews that lead to a diversity of human expressions of the value of biodiversity and ecosystem services, including anthropocentric (instrumental and relational values) and intrinsic (non-anthropocentric) values.

IPBES considers and interprets relational values as those values associated with the meaningfulness of relationships, including the relationships between individuals or societies and other animals and aspects of the lifeworld, as well as those among individuals. These relational values are manifold and articulated by formal and informal institutions in different social-ecological contexts. Another type of relational values, so-called eudaimonistic values are associated with a good life, have an anthropocentric orientation and include considerations of principles and virtues. These eudaimonistic values focus on the actions and habits that are conducive to a meaningful and satisfying life and are prominent across many cultural worldviews including for example, Ubuntu in South Africa, the Gandhian Economy of Permanence in India, Buen Vivir in several Latin American countries, and North American ‘back to the land’ movements (Chan et al, 2016). Further, the IPBES preliminary guide on values recognizes that there are so-called ‘relational worldviews’ in the sense that in many indigenous cultures it is understood that for all living beings relationships are the foundations of personhood, society and culture and that maintaining the integrity of these relationships is therefore essential to maintaining the integrity and stability of life in the world (IPBES, 2016). Finally, it is also suggested that relational values need to be part of any scoping of valuation studies as well as the assessment of values through the selection of valuation studies.

However, both the IPBES conceptual framework and preliminary valuation guide offers insufficient guidance about the implications for the IPBES process (including regional, global and thematic assessments) of focusing on relational values and thus going beyond instrumental valuation methods, associated data needs and gaps, etc. A meaningful approach to relational values may enable IPBES and associated conservation, development and education programs to conceptualize and operationalize information about human-nature relationships in novel and potentially transformative ways.

In this workshop, participants will (a) discuss how relational values might be integrated into IPBES work; (2) consider ways of ‘operationalizing’ relational values (including measurement methods and choice of indicators given existing data availability in different social-ecological contexts and different types of knowledge systems), (3) identify implications of 1-2 for IPBES assessments and other IPBES outputs, and (4) for broader conservation policy (e.g., through instruments such as PES, biodiversity offsets, etc).

This 3-day meeting will convene ~20 leading experts with interdisciplinary backgrounds with relevance for values and valuation, including experts that have engaged with IPBES, in order to draft a document that will be considered as an informational document for the IPBES-5 plenary in 2017. Other outputs, including a publication in a high-impact journal will also be considered.

[8] IPBES (2016). Preliminary guide regarding diverse conceptualization of multiple values of nature and its benefits, including biodiversity and ecosystem functions and services (IPBES deliverable 3 d). http://www.ipbes.net/images/documents/plenary/fourth/information/IPBES-4-INF-13_EN.pdf

We use cookies of our own and of third parties to improve our services and to be able to offer you, by means of web browsing analysis, the best options. If you continue browsing, we assume that you agree to their use. For further information, please click here.